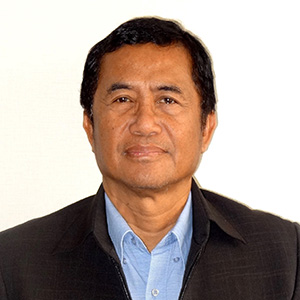 Chairman of Institute Sustainable for Earth and Resources, University of Indonesia.

Prof. Jatna Supriatna completed his Master of Science in 1986, and his Doctorate in 1991 from the University of New Mexico, Albuquerque- USA. He also completed pre and post-doctoral studies at Columbia University in New York. He studied management at the Sloan School of Management, Massachusetts Institute of Technology in Boston and at Tsing Hua University in Beijing. He served as Lecturer and is now Professor of Conservation Biology in the Faculty of Mathematics and Sciences, University of Indonesia. He was Country Director and then Vice President of the major international non-government organization based in Washington DC, Conservation International (CI) from 1994-2010. Since January 2011 to date, he has served as Chairman of the Research Center for Climate Change and Institute for Sustainable Earth and Resources of the University of Indonesia. He was co-director of the Association of Pacific Rim Universities (APRU, based at the National University of Singapore) of CMAS (Climate Change Mitigation and Adaptation Strategy) based at the University of San Diego, USA. He also serves as Country chair of the United Nations Sustainable Development Solutions Network (UN SDSN) for Indonesia. He became a member of the Indonesia Academy of Science (AIPI) in 2011. He also served on the Board of Trustees of the Universitas Indonesia 2014-2019, Board of Trustee member of UID Foundation, Belantara Foundation, Indonesia Climate Change Trust Fund of BAPPENAS, Bornean Orangutan Society Foundation, CSF Indonesia, TFCA Kehati (Indonesia Biodiversity Foundation), and Konservasi Indonesia Foundation. His research interests are in Primatology, Wildlife Tourism, Landscape conservation, Biodiversity Conservation, Climate change Mitigation and Adaptation and linking these to Environmental policy.

For his dedication to the environment and biodiversity works, he received the Most Excellence Order of the Golden Ark from his Royal Highness Prince Bernhard of the Netherland in 1999. In 2008, he received the prestigious award from President B.J. Habibie of Indonesia, or Habibie Award, for outstanding achievements in research on Natural Sciences. In 2010, he received the Terry MacManus Award of the United States of America for his dedication to conserving nature. In 2011, he received the Achmad Bakrie Award for Science for his commitment to developing Field Biology and Conservation in Indonesia. In 2017, he received Lifetime Achievement in the Field of Biodiversity Conservation from Conservation International. The SSC-Primate Specialist Group of IUCN named a new species of tarsier, a primate from Gorontalo, North Sulawesi, after him; Tarsius supriatnai. Other species named after him are the Togean flying lizard, Draco supriatnai from Togian Island in Central Sulawesi, and Jatna’s gecko, Cyrtodactylus jatnai from Bali. He has served as an editorial board member of several international journals such as IUCN Parks Journal, Asian Primate Journal (IUCN-Primate Specialist Group), Tropical Conservation Science Journal, American Journal of Wildlife Policy and Law, Biosphere Conservation, and Climate Resilience and Sustainability. He has published 22 books, mainly on Indonesia’s environment and biodiversity. He has published more than 150 papers in reputable International Journals such as Science, Nature, Conservation Biology, Evolution, Scientific Reports. Current Biology, Primates, International Journal of Primatology, and Primate Conservation, among others. According to Google scholar his H-index was 37, as September 2022.